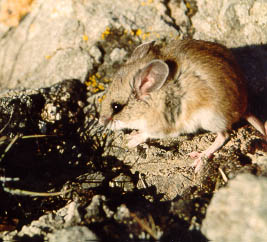 Mice generally live on an herbivore diet, but are actually omnivores; they will eat meat, the dead bodies of other mice, and have been observed to self-cannibalise their tails during starvation. Grasshopper mice are an exception to the rule, being the only fully carnivorous mice. Mice eat grains, fruits, and seeds for a regular diet, which is the main reason they damage crops. They are also known to eat their own feces. Mice are generally thought to enjoy cheese and people sometimes use it as mousetrap bait, but mice actually do not like cheese due to its fatty texture. Instead, they like food that contains high sugar, although chocolate is toxic to them